November 4, 2019
Imagine chartering a plane to your event destination. You get to choose the plane size, configuration, even food and beverage service. Picture your attendees’ excitement at this extra-special treatment.

He is the first aviator in California to earn this prestigious designation, going beyond proficiency and demonstrating advanced professional development, deeper knowledge of aircraft performance capabilities, and enhanced safety skills.

Freespeed Aviation serves as an agent in obtaining air charter services. The company sources its aircraft from 3 different charter operator platforms, utilizing a fleet of jets from qualified and carefully selected FAA and EASA Certified Air Carriers. This includes thousands of jets and turboprops that may not normally be based at your local airport, but can be made available for your special flight.

When using Freespeed, you are assigned a personal concierge who will assist throughout the entire process, making sure you as the event planner and all your attendees get the attention and information you need. All the details are managed, with planes, equipment, safety records and pilots all vetted by Freespeed.

“We won’t put you in an aircraft that we wouldn’t personally fly ourselves, with our own families on board,” says Rob Martin, Freespeed’s president. Martin himself has over 30 years of flight experience with over 8,000 hours of military and corporate jet flight time, and is one of a very small number to have achieved Flight Safety International Gulfstream G550 Master Aviator status. He has personally flown and coordinated complicated logistics and safe operations for U.S. Presidents, foreign heads of state and other high-ranking diplomats, and stars from all realms of entertainment.

Many charter operations require you to purchase “fractional shares” or “jet cards” to guarantee flights, Martin says, adding that these are typically expensive and assume that you need to use the plane on a regular basis, without much advance notice. Freespeed doesn’t require any investment other than the one you’re making for your specific event.

Haute Dokimazo engaged Freespeed Aviation to organize the chartered flights for its Secret Family Reunion event. The HD SFR event is all about bringing playfulness, surprise, excitement and fun into business. Freespeed’s concierge matches the tone event organizers set. Haute Dokimazo co-founder Nicole Osibodu received a video message and this note to let her know the plane was en route to JFK, where the group would be boarding: 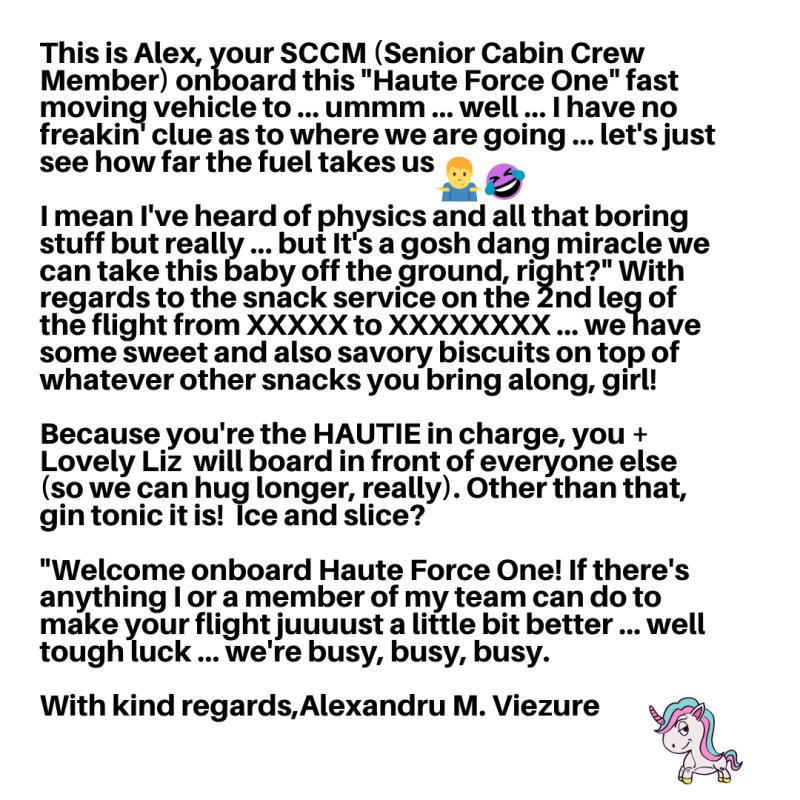 Smaller groups/smaller planes typically don’t need to go through the regular check-in process, but with more than 80 people, the Haute Dokimazo group did, although it had its own special bag check area. On Saturday, the group boarded the chartered 737 plane at JFK’s Terminal Four, shortly after learning that the plane’s destination would be Tuscany, Italy (with fuel stops in Canada and Iceland).

After boarding the plane, which had been set up with some rows of two with a small space between seats (a common European configuration for travelers who want extra room) and some with three, the flight got underway. In addition to the standard airplane meals, the HD team was able to do giveaway seat drops and bring on their snacks and drinks to serve. They were also able to play the music of their choice as well as use the intercom for games and event-related updates.

Unlike standard flights, chartered planes can have much greater leeway for departure and landing times — of course also dependent upon the airport, flight traffic and patterns. The HD flight took off later than expected due to delays at JFK, and landed at Pisa International Airport two hours later than originally planned, in part due to inclement weather in the Pisa area. (One attendee’s checked bag didn’t make it, but that is more likely to have happened on the JFK baggage handling end.) Attendees were able to collect their bags at baggage claim and proceed exactly as they would had they been on a commercial flight.

The group will return to JFK via Freespeed Aviation on Thursday, Nov. 7.